Participants agreed to focus the workshop on the following two problems:

We should address computing systems and systems work at the human scale and by using human psychology principles as a first class citizen. If we can address systemic problems in this domain, there is hope for other domains (once we can find the data). If we cannot in a domain where so much can be measured, what hope do we have elsewhere?

In computing systems much of the work is invisible, relying on human effort to construct internal models of how systems work to be able to develop, adapt and maintain such systems. At the human scale, the work itself has become increasingly invisible, with unseen teams collaborating remotely via text, APIs, Git repo documentation, and complex dependencies between internal and external teams.

The lack of visibility to this complex system causes much pain, with systemic problems typical of complex systems, problems defined in systems thinking as negative feedback loops, success to the successful, tragedy of the commons, etc. This pain appears at all levels from team operation to how companies compete in the global markets.

Computing systems and systems work should in theory be the easiest of human systems to visualise and model. Unlike other areas requiring data to be captured and converted (e.g. medical imaging), in systems work, all the data is available already on disk, with a CPU sitting next to it, it is just a matter of leveraging the data.

This problem statement picked up on the theme of human scale computing from the CIIC workshops in June 2017 and September 2017. Paul M. presented his ideas on technological support for a Human Operating System and we discussed the importance of whiteboards as a tool for representing, communicating and validating knowledge in an interactive context between two or more people.

Jorn pointed Paul to related background on the MODA + MODE meta paradigm for product line engineering and knowledge engineering and to a poster on Designing filtering, collaboration, thinking, and learning tools for the next 200 years that was presented at the inaugural Cultural Evolution Society Conference in September 2017 and corresponding open source in-memory semantic database tooling.

Psychological considerations and human cognitive limits that determine what can be considered human scale have also been described in the following articles on the CIIC blog:

Jorn and Paul M. agreed to share further information and to explore collaboration on research and development opportunities.

Since the CIIC workshop in June Paul Szymkowiak, Andrew Russell, and Jorn Bettin have had several further discussions and meetings regarding ways of supporting the activities of the members of the Dandenong Mechanics’ Institute and the establishment of a safe space for further creative and entrepreneurial work of neurodivergent team members.

Paul Szymkowiak pointed Andrew Russell to the Melbourne Eastern Suburbs Hackerspace for establishing contact with further autistic technologists and entrepreneurs with complementary skills that may be relevant for the projects of the Mechanics’ Institute.

Since the June 2018 CIIC workshop in Melbourne, Andrew provided an initial description of one of the many projects that are currently under development. Jorn offered to publish these projects on the Autistic Collaboration website so that they become visible to a wider audience and can attract interest from potential supporters, collaborators, and investors.

Calendar reminder: The next CIIC unconference in Melbourne will take place on 15 December 2018! 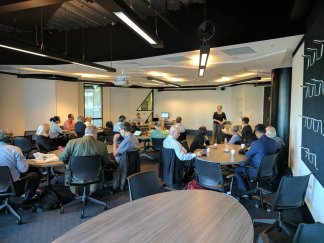 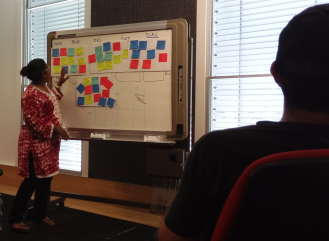