The abstract origins of economic beliefs

Most contemporary economic beliefs can be traced back to one of three influential political philosophies and related sets of economic principles, some of which of course have an extended history that predates the philosophies that popularised them over the course of the last three centuries.

Capitalism – the story told in the 18th century by Adam Smith about the fourth and “final” stage of economic organisation (“commercial interdependence”). In Smith’s philosophical perspective the primal moving agency is “human nature” driven by the desire for self-betterment, guided by the faculties of reason.

Liberalism – the story that developed out of ideas articulated by Thomas Hobbes and John Locke during the period of the English Civil Wars, the Glorious Revolution, the American Revolution, and the French Revolution in the 17th and 18th centuries.

Marxism – the 19th century story of Marx’ radical critique of philosophy, in which he examines a vast array of philosophical concepts from earlier thinkers in their dynamic relations to each other and tries to map these concepts to historical, social, political, and economic realities.

In contrast to scientific knowledge about the physical and natural world, economic understanding does not relate to a set of stable fundamental principles, but to perceptions of the prevalence of the various economic beliefs held by others, and of dynamic shifts in the prevalence of widely held beliefs.

It is important to distinguish between compelling and persuasive economic storytelling and the economic realities we encounter on a daily basis as individual economic agents.

Amongst the infinite possibilities of beliefs about human behaviour, the following are worthwhile paying attention to:

Further beliefs peddled by big economic storytellers and politicians that we individually may subscribe to also influence individual social behaviour, but tend to be constructed on top of the above two sets of “foundational” beliefs. Most arguments and heated debates about economics do not question a shared understanding of “fundamental economic reality”.

Upon closer examination our confidence in the beliefs resulting from going about daily economic activities may not be warranted:

Our beliefs in money, debt, institutions, and systems are better thought of as behavioural patterns (habits) than as beliefs that we are genuinely comfortable with.

Habits that don’t serve us well are usually referred to as addictions. We are addicted to:

Once we acknowledge our economic habits as addictions, the big economic stories start to appear in a different light. For example we may notice that these stories predate all advanced forms of automation and the impact of zero marginal cost in a digital economy.

This is a future which needs us to embrace the awesome capacity of humans – for discovery, for expeditions into the unknown, to mine the future, to care, create, dream.

To facilitate a rational discussion of commonalities and variabilities of economic stories I have extracted the foundational principles from original texts and from Encyclopaedia Britannica and have used MODA + MODE techniques for categorising the underlying motivations.  Follow the links embedded below to see the results.

The assumptions of capitalism are at the heart of our addiction. In fact, since 2002, the Chinese have consistently been one of the strongest proponents of capitalism compared with other publics around the world, even more so than Americans and Western Europeans.

The assumptions underlying neoliberal capitalism as practised by many Western democracies exclude many liberal ideals and instead include a number of important conclusions from the Marxist analysis of capitalism and human social behaviour – some of which have since been backed up by scientific evidence.

The idea of radical self-expression is, at least under the constraints of capitalism, a right-wing, Randian ideal, and could easily be the core motto of any of the large social media companies in Silicon Valley, who profit from people investing unpaid labor into cultivating their digital representations. It is in their interest that we are as self-interested as possible, since the more we obsess over our digital identity, the more personal information of ours they can mine and sell. …

It is misleading to develop growth-oriented policy around the expectation that decoupling is possible. We also note that GDP is increasingly seen as a poor proxy for societal wellbeing. GDP growth is therefore a questionable societal goal. Society can sustainably improve wellbeing, including the wellbeing of its natural assets, but only by discarding GDP growth as the goal in favor of more comprehensive measures of societal wellbeing.

from Is Decoupling GDP Growth from Environmental Impact Possible?

Updating the picture above to reflect the rise in new social modes of production that are not covered by the three big economic stories hints at the crutches that allow us to maintain our addictions.

Good stories in the conventional sense have a deceptive and addictive quality, making reality or the future seem more bearable and attractive even if our senses and body tells us otherwise. We don’t need any further “good” stories, we need something that serves us better than stories.

Instead of attempting to subjugate distributed peer production and not for profit organisations to the “rules” dictated by our addictions, we can adopt a new frame of reference and perceive these growing forms of organisation as tools and therapies for weaning us off our self-destructive habits. Similarly, instead of designing technologies that deliver bigger and bigger addictive hits, we can start designing technologies that actively help us overcome our culturally induced cravings.

“Good” storytelling acts in ways similar to alcohol, it is relatively harmless at small doses, but it is destructive in larger quantities and extremely tempting for some.

Across 30 nations surveyed by Pew Research Center both in 2013 and this spring, a median of 38% now say U.S. power and influence poses a major threat to their country, up 13 percentage points from 2013.

from Globally, more people see U.S. power and influence as a major threat

To truly leave behind our addiction to stories we need to reinvent interaction and communication at a very fundamental level – even more fundamental than money, debt, and economic transactions.

The scientific revolution taught us that conducting carefully designed experiments, evidence based reasoning, model building, and independent peer review is a far superior approach to understanding the world than reliance on old and potentially deceptive stories.

When it comes to coordinating economic activity at scale, imagine relying on evidence based models and digital automation rather than relying on the language of politicians and corporate executives. For example, rather than discussing the benefits of a large infrastructure investment scenario in classical financial terms, we are better served by creating a model of the resource and information flows within wider economic ecosystem based on input from the agents within the ecosystem, and then running extensive simulations to explore the effects.

A healthy diversity of new economic ecosystems can be built directly on our evolving scientific understanding of the commonalities and variabilities within human social behaviour at all levels of scale.

As a result we will rediscover the original Greek meaning of economics as household management and the innate collaborative tendencies of humans that are so easily overshadowed by cultural programming.

We can make use of powerful thinking tools for interdisciplinary research, design, and engineering to:

Join us for the next CIIC workshop on 16 September in Auckland, to build on the results from the last two workshops which focused on neurodiversity and on human scale computing , and to explore the essence of humanity and how to construct organisations that perform a valuable function in the living world! 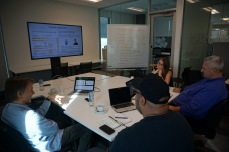 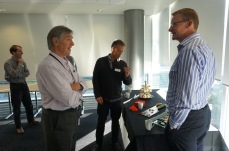